The Legislature’s 105-day session ended last evening, shortly after the passage of a new state operating budget that is – unfortunately – much more partisan than it needed to be. The budget wasn’t the only disappointing news to come out of our final week (and weekend) at the Capitol. But I’ll start this high-level summary of the session on a positive note.

Good news (thanks primarily to Republicans)
This year the debates weren’t just between Republicans and Democrats, or between the Senate and the House of Representatives. Senate Republicans also spent an unexpected amount of time on things directed toward the governor’s office. I was at the center of that, by introducing the bill to make in-person learning a legal right (SB 5464) and co-sponsoring the bills to safely reopen our state (SB 5114) and set transparent “metrics” for opening schools during a pandemic (SB 5037). Taking part in a strategy session with members of the Senate Republican leadership team, during a break in “virtual” floor action Thursday.

None of those bills advanced, but they allowed us to bring those issues directly to the Senate floor and to the attention of the news media. I know our state is still far from “open,” but the pressure applied by Republicans has helped return students to classrooms and ease the restrictions on business activity.

Some of the best parts of the new state budget have their roots in the Senate Republican budget I made public in mid-February, just one month into the session. We set the bar by proposing a big investment in forest health (which is not just good for our public forests but also for air quality), and new funding of important services for people with developmental disabilities, and more support for behavioral health, and relief for employers who were targeted for big increases in unemployment-insurance costs through no fault of their own. The Republican budget also provided funding for the Working Families Tax Credit – which was approved way back in 2008 as a policy, but was never included in the budget (even the current budget supported by the “Taxapalooza” of 2019). As I hoped, the Democrats followed our lead on all of these things in their own budget.

A clear difference in vision: Tax and spend vs. save and invest
Please have a look at this chart, and ask yourself: As a taxpayer, would I prefer Proposal A or Proposal B? 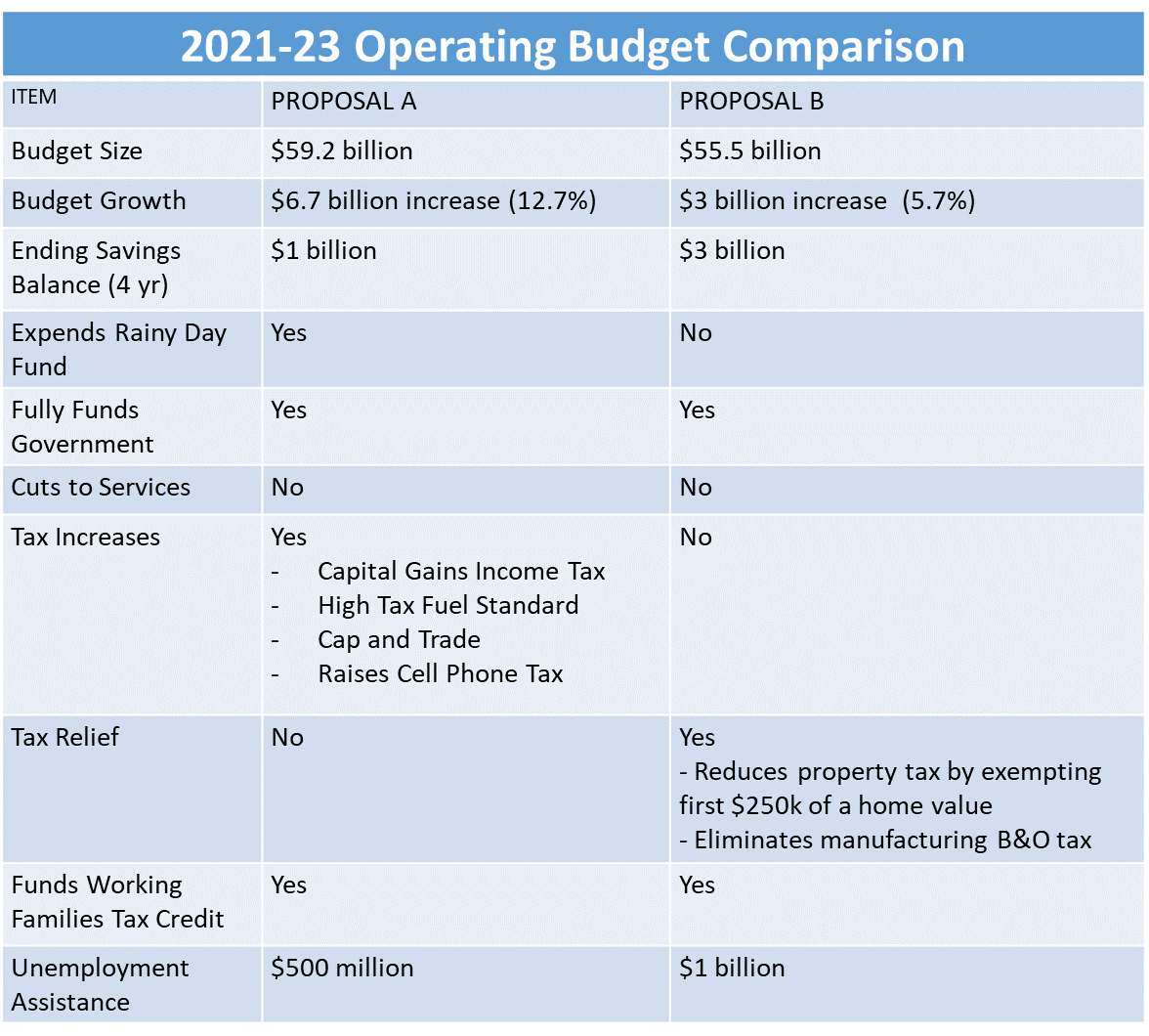 If Proposal A is your pick, then you’ll like the new state budget… because that’s what the majority Democrats approved yesterday, on a partisan vote. Proposal B is the Senate Republican plan.

Here’s how I put it in a statement to the media after the final vote on SB 5092:

“If you like a budget that is harder on people with lower incomes and people in marginalized communities, and sneaks a billion dollars out of the rainy-day fund into a slush fund, then the Democrat budget is a winner. Our Senate Republican budget would have maintained services, reduced the tax burden on families and small businesses, saved for the future, and made game-changing investments without requiring new taxes. Our approach respects the people and reflects their priorities, but the Democrats have other interests in mind, and that’s who comes out ahead with this budget.”

The new budgets are often the last pieces of legislation to be signed by the governor, so there will be time to go into more depth on the details of the operating budget.

Bipartisan capital budget makes important investments
The state’s capital budget typically wins strong bipartisan support, and this year was no different: the vote for HB 1080 was unanimous in both houses of the Legislature. The centerpiece of the $6.3 billion bipartisan spending plan for 2021-23 is the record $413 million it will invest toward the expansion of broadband. The COVID-19 pandemic has made the need for reliable broadband/internet access clear, not just in rural areas of our state but underserved areas within some of our larger communities!

More than half of the capital budget is financed with general-obligation bonds, with federal stimulus funds being the next largest source. Besides the broadband funding, this budget also will put more than $428 million toward behavioral-health services and nearly $350 million toward affordable housing, which are also more in the spotlight now because of the COVID-19 pandemic. The list of capital-budget investments in our 17th Legislative District is headed by $52.6 million for the new life sciences building at WSU Vancouver. I’ll provide more detail about the local funding in a future report.

The push for a new package of projects, to be accompanied by a gas-tax increase that could be nearly 10 cents or more per gallon, continued most of this past week. After the supporters acknowledged they’d run out of time, the rumblings began about a special legislative session happening later this year to focus on a new package. Republicans proposed a way to fund transportation projects while ending the upward spiral of the gas tax, but Democrats didn’t give that idea a chance.

Income-tax bill gets even worse before final passage
If you’ve followed my reports on the proposed income-tax bill (SB 5096), you know the burning question was not whether the bill would reach the governor’s desk, but if it would include the controversial “emergency clause” intended to prohibit the people from using their constitutional power of referendum to challenge the tax at the ballot box.

Well, the emergency clause isn’t in the bill – but the majority Democrats instead inserted a “stealth referendum prohibition” into what was passed by the House and Senate majorities over the weekend. It insists the bill is “necessary for the support of the state government and its existing public institutions,” which at least two Democrat senators admitted is aimed at preventing a referendum later this year; instead, voters would have to challenge the bill through an initiative, which is more complicated, more expensive, and can’t happen until 2022. By then, the income-tax supporters hope the current state Supreme Court will have overruled decades of precedent and ruled SB 5096 to be constitutional, opening the door to a FULL-BLOWN INCOME TAX. If that happens, we will be the only state in the Union that doesn’t treat this tax as “income.”

Majority complains about regressive taxes… then approves more regressive taxes
The progressive relief offered to families through the Working Families Tax Credit will be offset by the higher fuel and energy costs of two new Democrat policies. One is the “cap and tax” of SB 5126, which would allow state government to pull in another $500 million per year by selling permits to emit carbon. The second is the “high-cost fuel standard” of HB 1091, which requires the reformulation of motor fuel. And if those aren’t enough, the Democrats also went ahead and passed the bill to raise cellphone taxes (HB 1477).

We learned over the weekend, as the two energy/fuel bills were brought up for final votes, that together they could raise the cost of gas by $2.41 per gallon! To be fair, SB 5126 and HB 1091 would not be fully operational unless a bill that increases the gas tax at least 5 cents per gallon is passed – but as I mentioned, there is still a move toward bringing such a bill to a vote later this year. These are incredibly regressive actions, from the legislators who talk about Washington’s tax system being too regressive already!

From start to finish, session failed on being transparent
Did you know the security fence put up around much of the Capitol campus ahead of President Biden’s inauguration has yet to be taken down? That alone tells you how “open” the center of state government was during this session.

The lack of transparency carried through to this final weekend, and here’s how: when the Senate and House Democrats couldn’t reach a compromise on the new state operating budget, they called for a “conference,” which basically means two members of each house’s majority and one member of each chamber’s minority are supposed to meet and hash out the details. Being the Senate Republican budget leader, I was appointed to the conference committee – but when the committee met, I was simply presented with what turned out to be the final budget, and was never asked for input. It was as though the decisions had already been made!

Sadly, the House Democrats watered that bill (SB 5476) down before sending it back. They reduced the available charge to a misdemeanor, instead of a gross misdemeanor, which does nothing to discourage possession. Even worse, this weaker version – agreed to by my Senate Democratic colleagues – would automatically give way to full legalization of hard drugs in two years, unless legislators intervene then. It also replaces diversions with referrals, which simply won’t work – because the new law offers no “hammer” to force people into treatment. I refused to support such a soft approach. It would have been better for our local governments to set their own policies. Again, it was only Democrats who voted for this bill.

Majority puts the people back under one-person rule
I’m disappointed to report the people of Washington are back to where they were from March through mid-January — under the control of the governor and his emergency proclamations. The majority simply would not even discuss legislation (including my SB 5039) to update the state’s emergency-powers law.

This means the governor is again free to prohibit any activity without concern that the legislative branch might intervene. It’s something to keep in mind as more counties, such as King and Snohomish, may find themselves being forced back into Phase 2 of the business-activity restrictions.

‘Reforms’ aren’t likely to help law enforcement do its job
Between Thursday and yesterday, four bills making major changes in law-enforcement policy made it across the finish line. HB 1310 redefines “permissible uses” of force by law enforcement and correctional officers; HB 1054 establishes requirements for tactics and equipment used by peace officers; HB 1267 establishes an Office of Independent Investigations (within the governor’s office) for the “purpose of investigating deadly-force incidents involving peace officers”; and SB 5051 expands the authority of the Criminal Justice Training Commission far beyond the training and policy group it was originally intended to be.

My concerns about these bills fall into three categories: I think they’ll make it harder for law-enforcement officers to do their jobs; they’ll also hinder a community’s ability to decide what it wants in terms of law enforcement, by removing local control and handing it over to a bureaucratic commission at the state level; and lastly, by driving both good officers and potential new officers away from the profession.

Join us for another ‘virtual’ 17th District town hall May 13!
The virtual town hall we had in March ran overtime, so we’ll meet for 90 minutes instead this next time – from 6 to 7:30 p.m. Participants need to pre-register; click on this link to do that.

If you have a question or concern, please contact me by email, letter or phone. To make an appointment for a virtual meeting, please send me an e-mail! Stay safe!